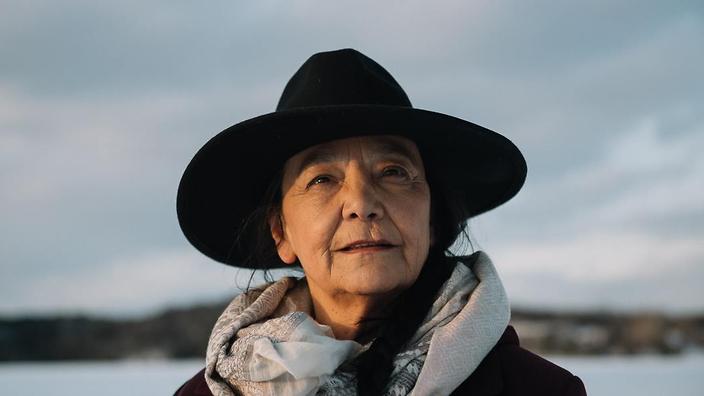 Tantoo Cardinal is a legend of Canadian screen.

With over 120 film and television credits to her name, as well as an Order of Canada, and the Early Grey lifetime achievement award from the Academy of Canadian Cinema & Television among her accolades, Cardinal’s incredible career has spanned 48 years and includes such titles as Dances with Wolves and Dr Quinn, Medicine Woman.

In Australia for the first time, Cardinal was a guest of the WINDA Film Festival in Sydney, which featured two of her newest works, Angelique’s Isle and Falls Around Her, which opened the festival, and was Cardinal’s first film as the top-billed actor.

When Cardinal sat down with Canada Down Under, she said she’d always wanted to get to Australia, thanks to the quality of the Australian Indigenous film Industry and a quirky link to the southern land through the name of the community she grew up in, but this was the first opportunity to make the long journey.

“It’s a particular honour [to be at the WINDA Film Festival]; because of the history of growing up in a community called Anzac, in Northern Alberta, I knew I would come here at some point, I was surprised it took this long,” she said.

“I’m participating in my bucket list right now. The Indigenous filmmakers from this part of the world have been so inspirational – doing quality films for many, many years, and they’ve set the bar high.”

Cardinal says taking on such a substantive role as the one she had in Falls Around Her was an opportunity for her to help tell a First Nations story through a First Nations lens.

“It was really exciting, but really fulfilling, to go to work every day and know that you had a full slate, and it was such a creative process, and to hear what [Writer/Director] Darlene [Naponse] wanted to see out of it all,” she said.

“It was a great sense of pride to be there, and to be doing this story in that way, in that place, where so many of the faces when you look around are from our world, stories from our world and the way they’re being told is from our world.”

Alongside her acting career, Cardinal has seen activism as a vital part of her life. This has extended to her being arrested during a 2011 protest against the proposed extension of the Keystone pipeline. She says her dedication to the environment goes hand-in-hand with being Indigenous.

“It made me crazy to see what was going on, what was happening in my own home, and then everywhere I looked – because we had the stories when I was a child, I knew we were headed for where we are now, and it created so much angst and so much rage because there were so many opportunities in a single day for people to catch on that the earth is alive … I think the best that we can do is try to be organic in our ways, being supportive of that life force that the children behind us are expecting.”

While there remains much to do in her fight to protect the environment, in the film and television world she’s seen significant positive changes since the beginning of her career, particularly in the telling of First Nations stories.

“When I first started it was at a time where they could say ‘no, we have to have oil and gas’, ‘no we have to have uranium’, because we didn’t yet have solar panels and wind energy and the biodiversity and all of this kind of stuff that we have now, and at that time we did not have our script writers and our directors and our camera people and all of that expertise,” she explained.

“The big change is we have all this artillery, we have all of this awakedness, and this passion and this determination and this knowing that we are human and that we have absolutely every right to be here, and not only that, there are some responsibilities.”

The Consulate General of Canada was a major partner of the 2018 WINDA Film Festival, and is proud to be supporting First Nations stories being shared in Australia.