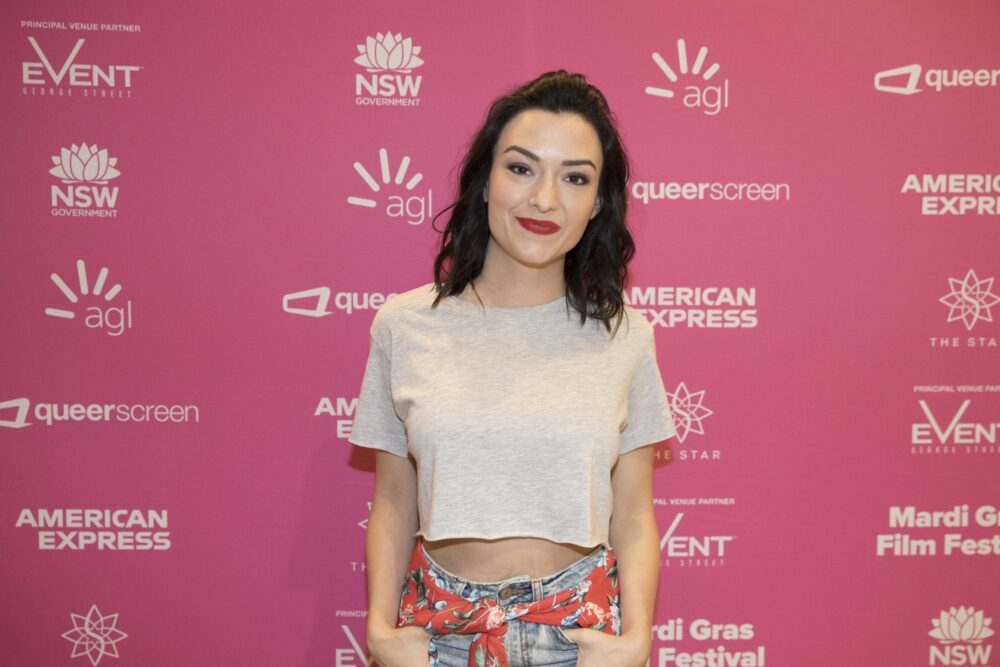 The level of anticipation for the arrival of Natasha Negovanlis at the Mardi Gras Film Festival would surely have been unrivalled over the course of the festival’s 25 year history.

Within the gathering crowd of ‘Creampuffs’, the affectionate name given to the fans of the LGBT webseries Carmilla, of which Negovanlis plays the title role, the sense of excitement was palpable, such is the level of connection they’ve found with the show’s characters and, in turn, the actors who play them.

Negovanlis, who has moved with the character from the online iteration to the big screen, told Canada Down Under that the connection the fans have found with the authenticity of Carmilla was part of what drew her to the show.

“When I first auditioned for Carmilla, it was summer 2014, and I didn’t even really know what a webseries was – it was quite a new concept to me – and I wasn’t super familiar with the whole YouTube format, but I was really struck by the character breakdown,” she told Canada Down Under.

“They described their characters in such great depth, and it’s so rare – even in this day and age – that you have female characters that are described beyond just ‘pretty’ and ‘fun-loving’, so that was really appealing to me; the fact it was created by a woman, also written by women, so I just auditioned for the role, and it completely surpassed my wildest dreams.”

Being a lesbian-themed web series that has exploded in popularity means the fans are part of that younger demographic – they have an online presence across social media channels and considering the response to the series were starved of queer representation. This has seen Negovanlis’ online following soar, providing her with a platform to both interact with fans and provide them with a visible role model – though it took some getting used to.

“When Carmilla first became popular it was certainly a little bit overwhelming – I think I went from about 500 followers to 30,000 within the first few months; I came from a classical music background and also a comedy background, so my demographic was vastly different from Carmilla’s audience,” Negovanlis, who now boasts over 100,000 Twitter and 144,000 Instagram followers, said.

“It really did feel like a natural progression because although the fan base is, on average, a little bit younger than me, I am a member of the queer community and I am very much a feminist and I do fit the demographic. It was overwhelming from the sense that I was bullied as a child and I didn’t ever feel like I fit in, and I didn’t really feel popular, so the idea that people were looking up to me was really bizarre.”

Negovanlis says the work she was involved in prior to Carmilla held her in good stead for the role she had been thrust into.

“There always comes challenges with online fandom and social media – there’s so much room for people to misinterpret things you say – it was an interesting road to navigate at first, but when you’re presented with the opportunity to be a role model and an activist and a leader; you can either step up to the challenge or not, and for me I act to tell stories and to make a difference,” she explained.

“Before I was in the public eye, I was a volunteer at a centre for addiction and mental health in Toronto, so I used to teach improv and drama there as a means of working through anxieties and depression, so it was sort of meant to be in a way, I feel like it was just a really natural fit.”

Web series as a story-telling medium is growing – it’s usually cheaper to produce, and is easily accessible to a younger generation glued to their screens. It’s also a platform that appears more open to telling fringe stories and helping to shine a light on topics and people that mainstream media has ignored or only touched on superficially. The growing popularity of the medium was evidenced in 2017 when Negovanlis took home the Fan’s Choice award at the Canadian Screen Awards, beating out nominees from more typical mediums.

“One of the first things I said in my speech was ‘most of you are probably wondering who the heck I am’, because I totally acknowledge that most people probably had no idea, because I think not only because Carmilla is a queer show, that makes it a niche thing, but also digital media is so new – it really is the future of how people – young people especially – are consuming stories,” she said.

“I think it really proved to people that there is an audience for queer stories and that they will make money, and then also that digital is the way to go.”

In Australia for the 25th anniversary of the Mardi Gras Film Festival, which is being held as part of the 40th celebration of the Sydney Gay & Lesbian Mardi Gras, Negovanlis said she felt privileged to be in the city and was excited to meet Creampuffs from around the globe.

“It’s a really exciting time, and I’m so honored to be here – just the fact that marriage equality is finally legal here – I can certainly feel the really positive, jovial energy in the city, and it’s really nice, and it’s been really welcoming so far; it’s such a pleasure to see rainbow flags everywhere and same sex couples holding hands and I’m just really honoured to, even in a very small way, be a part of this movement,” she said.

“One of my favourite parts of this job is when I actually get to meet our fans, because it’s one thing to see numbers go up on a screen, to see followers in cyberspace – eventually it just doesn’t seem real. It’s a completely different thing to actually get to feel people’s energy in person and to speak with then face-to-face and have them tell you what your work means to them – that feeling is completely surreal, and it’s so nice.”

Natasha Negovanlis can be found on Twitter and Instagram @natvanlis. The Consulate General of Canada, Sydney is a proud partner of the Mardi Gras Film Festival, and it was through this support that Natasha was able to be in Sydney.