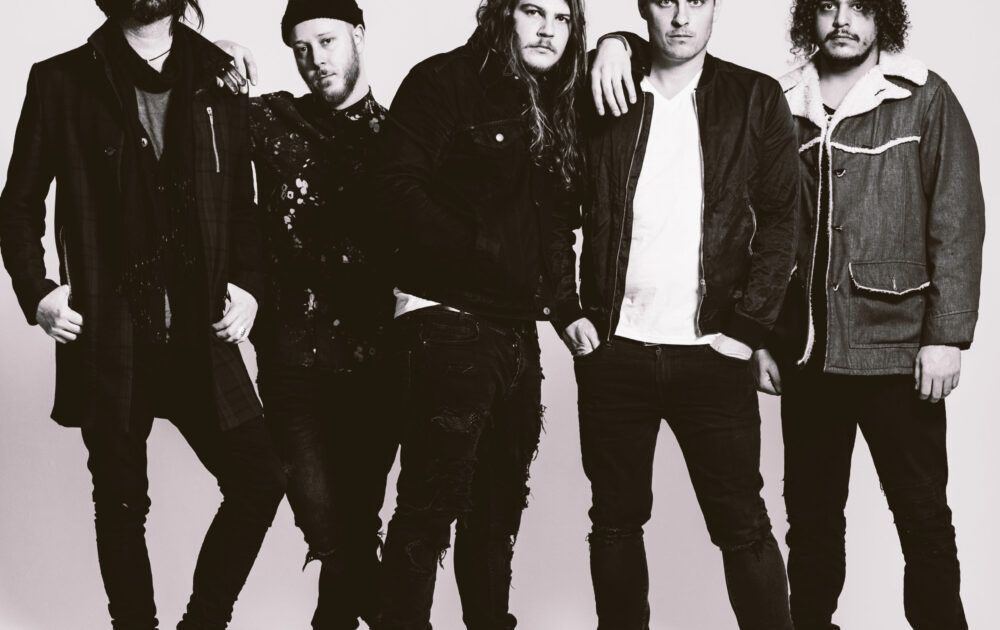 Jay Emmons, Brett Emmons and Chris Koster of The Glorious Sons in Sydney on June 5th, 2018.

It’s exactly what you’d expect from a band built from regular lives in small town Canada, playing songs written by him on a diet of early afternoon wake-ups after a night of drinking, taking in loads of coffee as he watched people go past his porch, and nights spent drinking more local brews ‘til the wee hours – before waking up in the afternoon and starting again.

“That’s what we want to do,” Brett says from a most un-dirty, sweaty spot overlooking Sydney Harbour, cradling a non-alcoholic drink. “You got to remember we’re fans, growing up listening to those guys [playing sweaty, dirty, bloody rock’n’roll].”

His older brother Jay is happy to take the description, especially for the Kingston, Ontario band on stage, where “some of the polish rubs off”. But he is happier still to point out that their second album, Young Beauties And Fools – the one which a few months ago won the Juno award for best rock album of the year – is less basic and sweaty, more “polished”. He’d even take you calling it slicker: “That’s what we were going for”.

That said, it wasn’t straightforward getting there for the band which includes Chris Koster, Adam Paquette and Chris Huot. The songs they had originally proposed for the second album just didn’t feel right, but the acoustic, introspective songs Brett was sitting on weren’t exactly “Glorious Sons songs” either.

The change came when their producers saw a way to merge the rock band and the folkish/countryish songs. All of a sudden, new directions opened up.

“Between our first and second album so much change has gone on,” says Brett. To which Jay adds, “we’ve all grown up a lot – it’s like a lifetime ago we worked on [their 2014 first album] The Union”.

Writing about the people he knows and the lives he’s observed became the cornerstone of the songs Brett now brought to the band. People like the central character of Josie, who was “drinking Manhattans and wearing gentlemen’s clothes”, finding life far tougher than the movies promise.

“I’m drawing inspiration from her and trying to paint what I see,” he says. “When I picked up a guitar and started talking about the things that were going on, it acted as a conduit for self-therapy and opened up this whole world I didn’t have before.”

Speaking of a whole world opening up, they may be from a small town, with a thriving creative community, but there was nothing small about The Glorious Sons’ ambitions and drive.

“It was always about getting out,” says Brett. “You want to speak from the highest platform.” And the impetus was there from the start for Jay.

“I always had a fire under my ass and kind of lit a fire under the rest of the guy’s,” Jay says. “All right, we’re big in Kingston, now let’s get to Toronto; then we got to Toronto and we were lucky enough to be taken on the road for our first tour, and we got the label and the agent and all of a sudden we are a touring rock band.”

A touring rock band on its first, but definitely not last, tour of Australia where they’ve found a connection. They’ve been opening up for local act Dead Letter Circus who had toured with The Glorious Sons in Canada in the kind of reciprocal arrangement musicians on both sides of the Pacific have found hugely helpful.

“I think I noticed by the end of our third show, in Perth, we finally got the audience where we need to have them,” says Jay. But they were ready for the hard work to make that happen according to Brett. “When you start there’s always so much fighting in mud to be successful.”

Fair enough. That is par for the course with sweaty, dirty, bloody rock’n’roll.

The Glorious Sons play a headline show at the Sly Fox in Enmore, Sydney, on Saturday June 9, and with Dead Letter Circus at Bald Faced Stag, Leichhardt, on Sunday, June 10