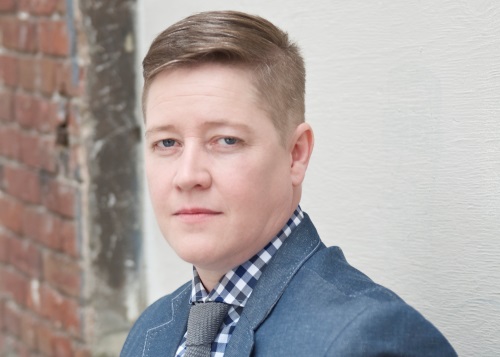 Since giving a TED talk in 2015 about the need for gender-neutral bathrooms, Ivan Coyote has had to talk about bathrooms. A lot.

The issue has been gaining wide-spread attention thanks to laws being introduced in some areas of the United States which have been severely criticised by human rights groups around the globe.

“Stuff like HB2, that awful bill in North Carolina and the other legislation that’s happening that’s either in the works or being discussed, I guess it brings to light the bigotry – it’s unbridled bigotry that gets perpetrated on trans people all the time – so I guess it’s good that there’s been light on that,” Coyote said.

“So I think it’s brought the issue to light in a way but the result of that has been fanning the flames of that kind of ignorance and legitimising this very unfounded, statistically non-existent fear of trans people ‘sneaking’ into the wrong bathroom to do nefarious things.”

A renowned storyteller from Whitehorse in the Yukon Territory, Coyote says that while the issue is, and will remain, an important one, it has been draining.

“I’ve actually decided that 2016 was, I guess, my year of having to talk about bathrooms in very public forums, come January 1st 2017 I’m not talking about it anymore,” Coyote said.

“I’ve made my contribution to the discourse around it – now I’m done.”

In Australia as part of a delegation of Canadian writers attending the Melbourne Writers Festival among other events nationally, Coyote said the opportunity to travel with the group has allowed them to introduce themselves to new, unlikely audiences.

“There’s just access to audiences that would never, ever have stumbled upon my work, because we like to put people into boxes – I’m constantly being called a spoken-word artist, I’m constantly being called an LGBTQ artist, which I am, I am technically both of those things, but that sometimes gives people the opportunity to dismiss my work as something that’s not relevant to them, but my work is about a lot of things,” they said.

“I get afforded an audience of people that my work may never have been on their radar before, and I got to meet and sit down and break bread and share meals with and talk with publishers, journalists, magazine owners and other festival directors.”

Along with amplifying their work with a fresh crowd, Coyote explained that another benefit of attending the festivals was the time spent with their fellow Canadian authors.

“It’s a strange way to make a living; the trials and tribulations of it are very specific to this craft, and sometimes you just need to talk shop, and there’s not a lot of people you can talk shop with, so I’ve been afforded lots of shop talk, and that’s vital to your artistic practices.”

An award winning author, Coyote’s career grew out of a love of performing and conversing with audiences.

“I started off as a folk singer way back in the early, early nineties doing little coffee shop gigs and stuff like that. Somewhere along the line I sort of realised I liked the banter bit quite a lot,” they said.

“I started to write short pieces – there’s a little bit of a grey area where I don’t remember the very first few gigs, but they must have gone OK because then I started getting asked to do different events and slowly moved up from there.”

Plying their trade throughout Canada, Coyote has experienced the ups and downs of the ever-changing artistic climate in the country, with changes in funding often causing a ripple effect that can take years to fully take hold.

“The result of when that happens is a shrinking of the pie, and so artists feel in competition for scarce resources and so I think it does things to the fabric that knits an artistic community together when people feel like there’s not enough to go around,” they said.

“Look at the things we did today in that room [at the Melbourne Writers Festival] – look at the discussion we had, at the topics we covered, and that’s just three writers speaking. What do we do in terms of disseminating ideas, how do you value those things?

“You don’t see the true results of a shift for probably five or six years at least – we’re all just coming out of our harboured shells right now trying to look around and go ‘ok what are we capable of now? What are our priorities going to be?’ as opposed to the fight or flight mode that I think the arts in Canada has been in for quite some time now.”

While Coyote would love to get out and see more of Australia while they are here, chances are the site-seeing may have to wait for another trip down under.

“There are lots of things I’d love to see and do, but honestly I’m not sure if touring and tourism belong in the same trip – I’m tired,” they said.

Ivan Coyote attended the Melbourne Writers Festival with the support of the Canada Council for the Arts and the Consulate General of Canada, Sydney.