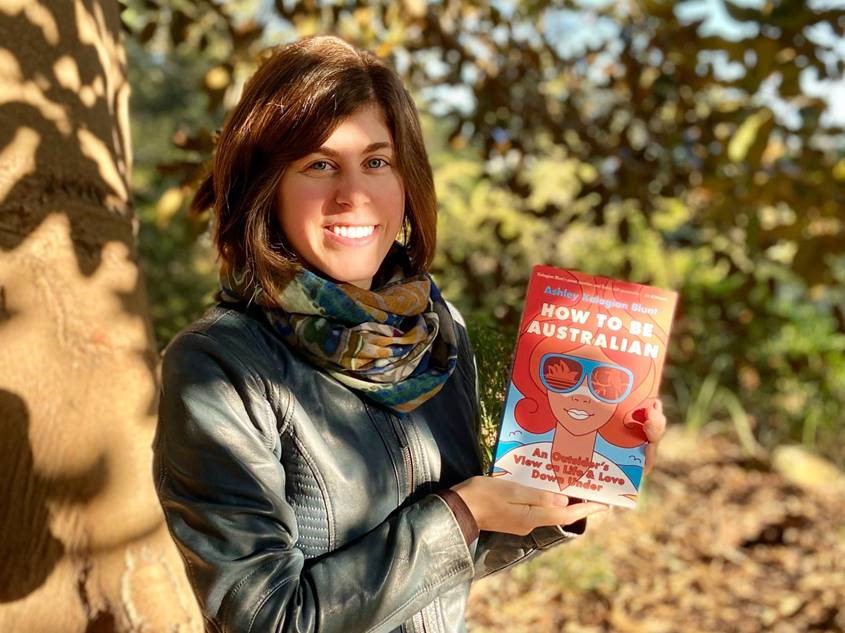 When Ashley Kalagian Blunt travelled from Canada to Australia in 2011 with her husband, she expected a fun year of study in a country that was essentially a warmer version of Canada. Instead, she found herself confronted by culture shock and the even greater surprise that her husband wanted to extend their stay. Determined to make the most of her time and get to the bottom of what it means to be Australian, she embarked on a journey of discovery travelling around the country and learning as much as she could about Australia’s history and oftentimes confusing social customs and cultural quirks. Ashley spoke to Canada Down Under about her experience

It’s been some years since you finished the book. Would you say you have a greater sense of being Australian now than you did then?

As the book recounts, I eventually created a home by moving through life like a bowerbird, collecting bits of Australiana and weaving them into myself. Though the story ends in 2016, my project of reading, talking to locals and traveling widely across the country has continued. I’m still very Canadian, but I’m also a tiny bit more Australian every year. This is the wonderful thing about identity: it grows with you.

You don’t shy away from the hard challenges of trying to settle in a new country and write openly about how you dealt with your anxiety and the uncertainty of living somewhere new. What did you find most challenging and why?

One of the biggest challenges was the mental shift I had to make from the incredible freedom I had in my early twenties into the responsibilities and commitments of adulthood. After I finished my undergraduate studies, I lived and worked for several years in South Korea, Peru and Mexico. I loved the experience of arriving in a totally new place and re-establishing myself, but then I decided to marry someone I loved very much, but who wasn’t a traveller. I convinced him to try living abroad with me in Australia for a year, and he liked it so much, we’ve stayed. It wouldn’t have worked for him to move to a new place every few years, and I suppose it wouldn’t have worked for me long-term either. But the effort to adjust to this new phase of life hit me very hard.

What would you say are some of the biggest differences between Australian and Canadian culture?

Canada’s relationship to law and order is different to Australia’s. The Royal Canadian Mounted Police figure into our mythology as much as the cop-murdering antihero Ned Kelly figures into Australia’s. Another difference is in the way we deliver humour. Canadians will generally smile to signal when they’re joking, whereas Aussies are world champions at deadpanning. And while Canadians have 4,000 unique terms, Aussies have an incredible 10,000 – they’re serious about their slang!

You did a lot of research into Australian folklore and history for this book – did you find that this helped you understand Australia better as a country?

Absolutely! One of the best books I read was They’re a Weird Mob, the supposed memoir of an Italian visitor in Sydney trying to figure the country out. Actually, the author was an Australian named John O’Grady. He ends the book with advice for ‘bloody new Australians’: return all shouts, and avoid bludging (slacking off) and losing your temper when your workmates ridicule you – and if they’re Aussies, they will. If someone does you a favour, return it, but don’t overdo generosity. Finally, remember to abuse your friends to their face, but not in private. Even though it was published in 1957, this advice is still some of the most culturally insightful I’ve found.

You write a bit about how you took a deep dive into Australia’s Indigenous history. How did that affect how you connected with Australia?

I think it’s the responsibility of everyone who calls Australia home to understand its history, and particularly its Indigenous history. For me, learning about the egregious treatment of Indigenous peoples under colonialism, including the Black line in Tasmania, reinforced the importance of advocating for justice today. At the same time, learning about Aborginal land management and knowledge has fascinated me, and given me hope for the country’s future. The best example of this is Dark Emu. In it, Aboriginal author Bruce Pascoe reveals how complex Indigenous agriculture and architecture truly was, and so urges us to reconsider our understanding of Aboriginal civilisation. As he concludes, ‘To deny Aboriginal and Torres Strait Islander agricultural and spiritual achievement is the single greatest impediment to intercultural understanding and, perhaps, to Australian moral wellbeing and economic prosperity.’

As a kid, the furthest I got to travel outside western Canada was Bizmarck, North Dakota. I was insatiably curious about the world, which is how I ended up moving from my parents’ home to Asia at the age of 22. Living there, and then in Latin America, I had the opportunity to meet many locals, expats and migrants. In my experience, living abroad encourages people to be more tolerant and understanding, particularly when they move to a third country. If you grow up somewhere and move to another country, it sets up a dichotomy: we do things one way, they do things a different way. This was definitely how I interpreted things when I lived in South Korea. But moving to that third country breaks down the dichotomy. You realise there are endless ways to do things and perceive the world around you. Moving abroad is challenging, but if you’re able to do it, it’s worth it for insights like these.

How to Be Australian is available from bookstores now. Visit ashleykalagianblunt.com to find out more and download the free book club discussion guide.