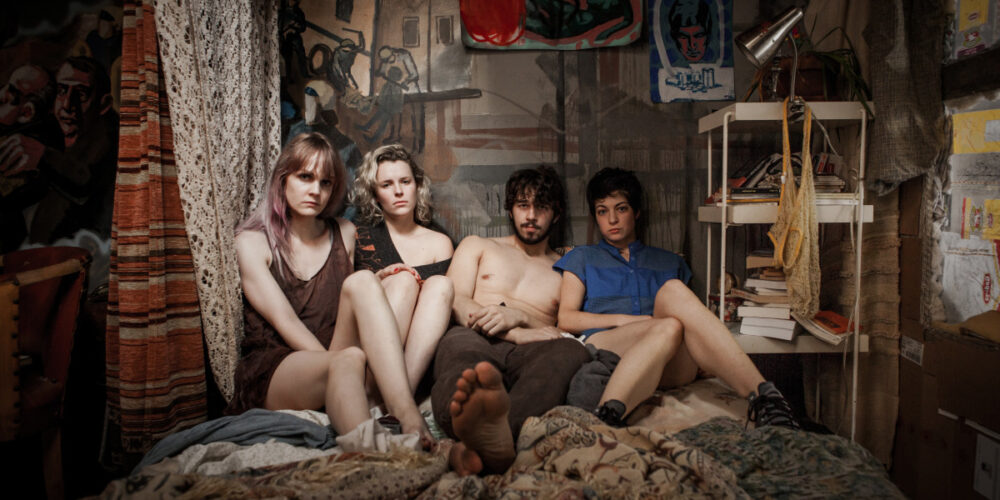 Those Who Make Revolution Halfway Only Dig Their Own Graves is not easy to watch, admits the film’s producer, Hany Ouichou.

The three hour, low budget film, which has made waves across Canada, is a grungy drama based around the Maple Spring – student protests in Quebec in 2012 and the continuing unrest, focussing on a motley crew of five revolutionaries.

“It seemed like an impossible film to make, it’s a three hour piece, a very low budget film, but the miracle happened,” Ouichou told Canada Down Under.

“A fund in Quebec gave us money, and we started from that. I was determined to make it with whatever money I got.”

The film follows a tight knit group of rebels who have been disillusioned by the failure of the large-scale protests to make any meaningful impact, and are determined to continue the state of civil unrest. Selecting the right actors for the each of the five main parts was vital in ensuring the right dynamic and chemistry that creates the films edgy atmosphere.

“[Casting] took three months, we auditioned more than one hundred people and we took the best, I can say that. But I think they were close to the characters in terms of their vibe, so it was very natural,” he said.

“It was very important for the directors [to case a genuine transgendered actor]; we thought it would be hypocritical to work with someone who didn’t go through all of this identity crisis.”

That determination to get the film made right has reaped significant benefits for Ouichou and his filmmaking team. After it competed in the Platform program at the 2016 Toronto International Film Festival, it won for Best Canadian Film. It was also nominated for three Canadian Screen Awards, including Best Motion Picture.

“[The awards] were a total surprise, it was the last thing I was expecting to be honest – I still don’t understand,” Ouichou laughed.

“I think what made me then most proud was the fact that it’s not a classical film, it’s a piece of art to a certain extent, and I’m very proud that people saw that. I know it’s not an easy film to watch, even for me, but yet there are so many films that are made that are kind of all the same and I think this one stands out really for its craziness – it’s a crazy film.

“It gave us legitimacy and I kind of needed that, because it was a very very hard film to make on so many levels.”

The film asks questions about the efforts of supposed revolutionaries and the manner in which they go about proposing change. Ouichou says there’s now enough evidence from past movements that this kind of rebellion needs some adjustment.

“The directors are kind of nostalgic of the social struggles that happened in the 70s, and one of the questions that the film raises is this [juxtaposition] between an ideal of revolution that was born in the 70s and how you transform it nowadays to make it relevant and real,” he said.

“I think the answer if you watch the film is that it won’t work, there’s something wrong with this idea and there’s something to find, a new way of social communication, of being a revolutionary that is yet to be found.”

Ouichou says initial concerns about whether the film would have a reach outside of Canada where proved baseless.

“I’m surprised that it had so much impact outside of Quebec and Canada,” he said.

“It is about Quebec and Canada, but it’s also about the idea of young revolutionaries and that’s a universal idea – I think it talks about something that a lot of countries have experienced.”

Even with the film’s success within Canada, and at Film Festivals around the world, Ouichou was surprised at the invitation to showcase the film in Sydney.

“I didn’t really know the festival, I didn’t know Australia or the city, so for me it was a bit of a surprise, but then I looked at the festival guide and I saw all the films that were selected, and it’s pretty difficult to be here,” he said.

“They take the best films from all of the international festivals – and I’m amazed actually. I’m amazed that the film caught the eye of the programmers.”

Hany Ouichou was a guest of the Sydney Film Festival thanks to the support of the Consulate General of Canada, Sydney. Those Who Make Revolution Halfway Only Dig Their Own Graves was part of the Festival’s 2017 Focus on Canada.