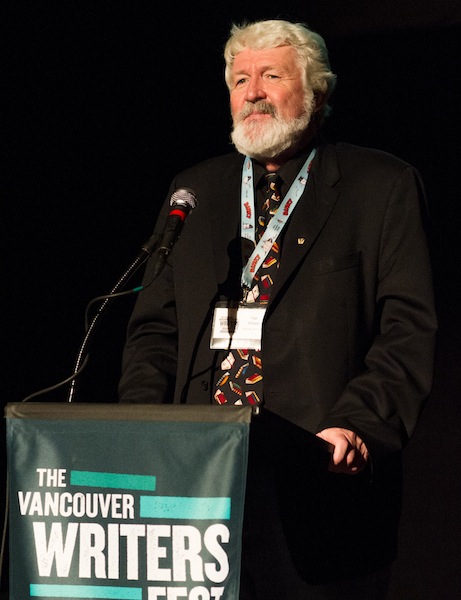 Hal Wake holds the position of Artistic Director of the Vancouver International Writers and Readers Festival, and it’s not one he’ll be giving up easily anytime soon.

“It’s the best job in the world bar none,” he said.

“I create ninety events, conversations, and performances across different formats, and then during the course of the festival I spend most of my time watching those events, moving around the island from venue to venue, and then at night I sit and drink wine and beer with some of the smartest people you’ve ever met.”

Curating for a large writers festival does have its stressors however, including sifting through hundreds of potential guests and searching for a balance.

“Publishers are putting forward writers that they want to get out in front of the public, sometimes they’re very well-known and something they’re not known at all basically,” he said.

“We pick from that pool, but we have by the end of the process about 300 names that we’re sorting through, then you start to look for books that rub up against each other, conversations you can see that person talking to that person would be cool, and then you make your selections and – the good thing and the bad thing I guess in a way is that every choice you make, there’s no going back – you can’t uninvited somebody.”

In Melbourne for the Melbourne Writers Festival with a delegation of Canadian authors, Wake said he planned to use the trip, which had already toured through New Zealand for the WORD Christchurch Writers and Readers Festival, to introduce himself to new writers and simply see how the different festivals operate.

“I have a list of six writers from New Zealand I could invite tomorrow, as well as some writers from other countries who were at their festival,” he said.

“And you also see how other festivals are run and you steal ideas – sometimes it’s just logistics or presentation, what you put on the screens for the audience to see, so it’s valuable for sure.”

As a former CBC radio broadcaster and experienced moderator, Wake has now been at the helm of the Vancouver Writers Festival for more than a decade, providing him an ideal platform to form an informed view of the writing landscape and the challenges for authors in today’s world.

“With cost of living and inflation and everything, the same dollars don’t go the same distance,” he explained.

“Publishers are having to watch their money pretty carefully, and as a result I think mid-list writers, writers who aren’t the big sellers or who aren’t emerging and potentially exploding onto the scene, they’re facing some challenges. If publishers are going to cut back on their publishing programs, it’s going to be that mid-list.”

One of the important aspects of bringing a delegation of writers across the globe to the different festivals is introducing them to audiences that may have never previously come across their work.

“Canada punches above its weight when it comes to writers. We’ve got tremendously talented writers, many whom aren’t known – or well enough known – abroad,” he said.

“Watching the audiences react to writers that they may not have heard of before. Watching, in Christchurch, every single copy of every single book selling – they’ve sold out. Standing ovations. I think it’s hugely important.”

And in being introduced to those new writers, Wake says he believes the audiences are becoming involved in conversations that can have a truly long lasting and important affect.

“So when Sheila Watt-Cloutier talks about the challenges in the Arctic with climate change and a culture that is literally built on ice and snow potentially changing or disappearing as that ice and snow melts away, and challenging us to think about how we’re going to stop that from happening, those are hugely important discussions.”

And, he says, the benefits to the writers themselves are just as profound.

“Writing is a solo event, reading we mostly do by ourselves. Writers festivals bring writers and readers together for conversations to just take that, and make it a communal experience.”

Hal Wake and the Canadian delegation of authors were in Melbourne with  the support of the Canada Council for the Arts and the Consulate General of Canada, Sydney.