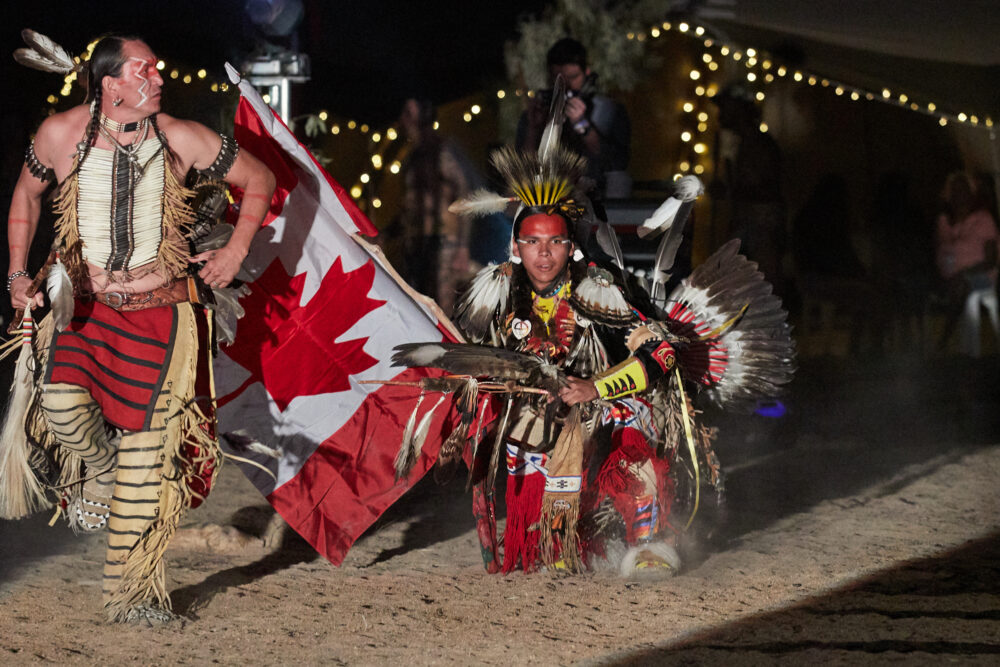 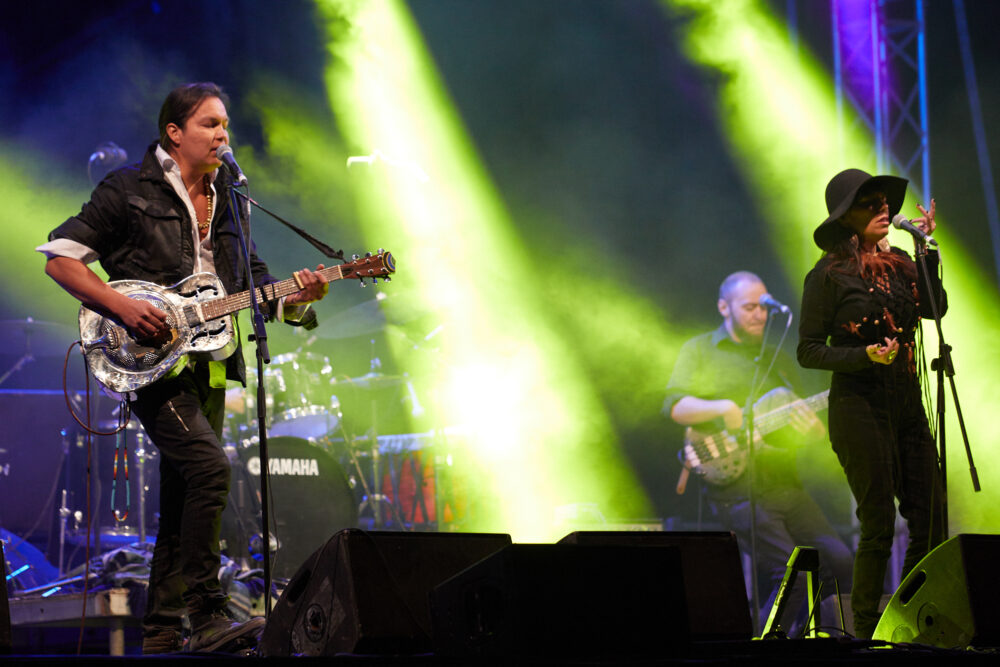 Deep in the heart of the Queensland outback, under a spectacular blanket of stars made visible so far away from any blinding city lights, an extraordinary meeting of culture, history and talent was taking place within a sacred circle.

The coming together of native nations, the Kabarrijbi Wangkijbi Spectacular, held as the opening event to the Gulf Country Frontier Days Festival in Gregory, Queensland, brought together First Nations dancers from around Australia and the world to perform together in a shared experience of learning, healing and empowerment.

Held over four days, the festival combines dance, music and rodeo in a celebration of Indigenous culture. Dancers from Australia, New Zealand, the United States and Canada performed together for the opening ceremony and throughout the weekend, complimenting an array of musical talent from around the world, including Canada’s Digging Roots, Micki Free (USA), and legendary Australian singer Archie Roach.

Along with the outstanding Digging Roots, the Canadian contingent at the festival included Eugene Brave Rock, a Blackfoot Indian from Southern Alberta, and Tymon Carter from Onion Lake Cree Nation. Brave Rock, who is known for his role in Hollywood blockbuster Wonder Woman, told Canada Down Under it was a privilege to be part of such a unique event.

“It’s been a really huge honour to come here and dance with the many dancers here from all regions and all Indigenous people, it’s amazing to share that circle, to dance inside that circle,” he said.

“The people here have gone through a lot of similar experiences like we have, being Indigenous and being oppressed, and it’s nice – this is a huge form of reconciliation, it’s amazing, I’m so thankful to be a part of this.”

Brave Rock said the opportunity to meet and share the stage with other Indigenous people was one he would treasure.

“I knew they’ve had the same struggles as us as Indigenous people, but I didn’t have any kind of first-hand knowledge, so coming here and having this experience – we’re out in the Outback, four hours from anywhere, four hours from a tiny little airport – this is amazing,” he said.

“It’s really nice to come here and listen to these old stories and old ways of life, and how they want to bring it back; it’s so amazing to get a crocodile tooth – not buying it in a store, but seeing it pulled out of a crocodile and being gifted that, that’s something I’m going to treasure for the rest of my life. I’m going to dance with it every time I dance, I’m going to tell stories about that tooth because of my travel here.”

Nineteen-year old Carter, who looked spectacular in his full regalia, agreed that the experience was one he would hold dear.

“It’s such an honour to be here, to represent Canada and all my nations, all my friends and family back home – it really hit me when we were all out there dancing together, I’m here representing – this is the first time anything like this has taken place, we’re making history here, it feels so good to be taking part in it,” he said.

“After talking to some of the Indigenous people throughout the weekend here, talking about what we do, and how we do it here, it’s very similar – it’s awesome.”

Like Brave Rock, Carter has begun to dabble in acting and modeling work, having won roles in The Revenant with Leonardo DiCaprio, and The Alienist, but he uses his dancing work to connect to his traditions and roots.

“It’s healing. You’re not only healing other people, but you’re healing yourself. You could be having a bad day, and then I’ll hear a Powwow song, or I’ll think about my outfit, I’ll slap it on and I’ll go to a Powwow,” he explained.

“For those three, four minutes that I’m out there for a song, I forget about everything, it’s just me and the drum, and it takes you to another world when you’re out there dancing.”

Brave Rock explained that along with the healing benefits of dance, holding onto those traditional values has provided him with some incredible opportunities.

“I was raised with traditional values that I keep really close, along with my language, having long hair, riding horses, singing and dancing – it’s giving me the opportunity to travel around the world and represent my people of Southern Alberta and share and learn as well, learn about other languages, learn about other cultures as well as sharing my own,” he said.

“For me dancing, it’s a prayer – we dance to the heartbeat of mother earth, because that’s where we come from, and that’s where we go when we die, and to share this experience with the people that are here – I don’t think this has ever been done before, so it’s a huge honour.”

Anishnaabe photographer John Paillé, who attended with the support of the Consulate General of Canada, says the festival provides an opportunity for Indigenous peoples to truly own the way they are perceived and seen in the wider community.

“I am strong believer in Indigenous peoples controlling how we are represented,” Paillé said.

“We have not always had the ability or access to control how we were represented to non-Indigenous audiences, which is why, as an Anishnaabe photographer, I believe it is important for our own people to be documenting our events, peoples and cultures.  Having the Consulate General of Canada support me in capturing this festival, is a great example of how change is happening.”

With the Festival only in its second year, Director Alec Doomadgee and his team will be looking to build upon the success of 2018, with artists and guests alike thrilled with the opportunity and potential of the festival in the future. When asked what he thought about spreading the word and getting other Indigenous Canadians involved in the Gulf Frontier Days Festival 2019, Carter only had one response:

“Oh, I’ll definitely be back next year,” he replied, grinning.

The Consulate General of Canada was a proud supporter the 2018 Gulf Country Frontier Days Festival, which helped to support the attendance of Digging Roots, Eugene Brave Rock & Tymon Carter, as well as photojournalist John Paillé, an Anishinaabe Canadian, whose work can be found HERE