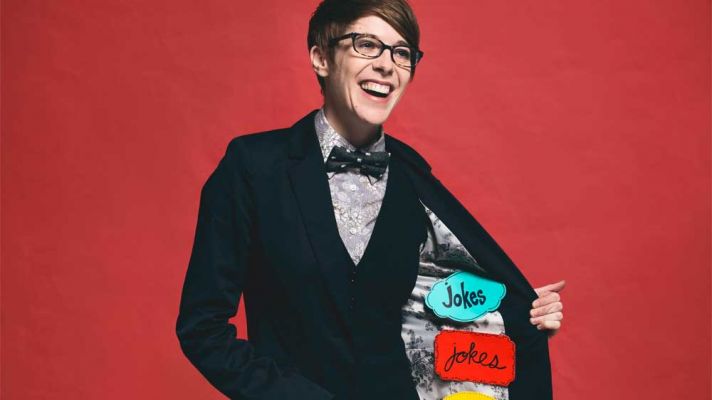 When Canadian-American comedian DeAnne Smith first came to Australia to perform in 2008, she was relatively new to comedy and still honing her craft.

Now, a decade later, she’s a seasoned performer with numerous awards to her name, and a viral YouTube video that’s cracked 40 million views.

Currently performing at the Melbourne International Comedy Festival, Smith told Canada Down Under that coming to Australia so early in her career affected the way she went about her comedy.

“I came over really early in my comedy career, like two years in, and started doing the circuit here, so I really feel like the Australian style of comedy has influenced the way that I do things to a degree, because I was able to be exposed to a lot of stuff that people back home in Canada and North America didn’t really know about yet, so I think that kind of informed my development as a comic,” she said.

That first journey to Australia netted Smith the Best Newcomer Award at the Sydney Comedy Festival, and she’ll return to the festival in 2018 with her new show Worth It.

“The show is not at all what it might say in the blurb about the show, we write those in October and I hadn’t written the show yet. In January the show started revealing itself to me and I scrapped anything else that I had written and let the show be what it is,” Smith laughed.

“Some of the trademarks of my type of show I guess, things that I continue to do and come naturally to me, that people like, is that there’s a fair amount of audience interaction – if you’re sitting in the front row at one of my shows, you will be talked to – but you will be talked to in the kindest most gentlest way, everybody is a hero in my show.

“I’m not there to just recite something you can see online, or download an audio clip of. My energy is different every night, the crowd comes together in a different way, let’s see what kind of alchemy we can create with these elements, and I find that so fun.”

Having already been to Brisbane and Melbourne, Smith will continue her tour to Sydney and Perth, with 5% of ticket sales being donated to Australian LGBTQIA non-profits. She told Canada Down Under that she’s come to understand the importance of being herself on stage thanks to the response that has come from her audience.

“I started comedy when I was 29, so I was pretty established in who I was, and I was never going to pretend to be something other than I am, s that’s just important to me, but since I’ve gotten the feedback from kids and stuff, then I do think it’s important to be a strong presence on stage and unashamed of being queer,” she said.

“I got a lovely email a few months ago from someone in Australia, they wrote me this message and said when they were 17 I came into their town as part of the Melbourne International Comedy Festival roadshow, and in their tiny little town apparently at the interval some people left because my set was so queer or so gay or whatever, and it would have never been over the top, but they said it was really important for them in that moment to see someone like me come into their little town and just be myself and be proud about it and not worry about other people’s opinions … that gig doesn’t stand out to me as memorable or anything, but for that little 17 year old sitting in the audience, they wrote me now six years later to say that was important to them, and obviously something that they’ve thought about, so it’s through that feedback that I come to understand the importance of being ‘out’ on stage.”

Originally from New York, it was Canada’s openness and progressive nature that drew Smith – now a permanent resident – to the country back in 2006, along with her girlfriend at the time who was moving to Canada to further her own creative endeavours.

“I started comedy in Montreal, I moved to Montreal with my Mexican girlfriend at the time, who was going to Montreal to go to mime school, L’école de mime, and I was going to do a creative writing MSA at Concordia in Montreal, and then deferred and just started doing comedy, and found out that I really loved doing comedy once I started there was just no stopping that,” she said.

“Canada has had gay marriage since 2005, which is not the be all and end all of what a country can do, but I think it indicates a certain level of progressive thinking and wanting equality for all people, so I think that’s a great benchmark that Canada had that in place.”

And on ‘that video’ – her stand-up routine titled Straight men, step up your game, which has been viewed on YouTube over 40 million times, Smith says it opened up a lot of doors, and shone a light on her back catalogue of work.

“It gave me the confidence to continue to do what I do, and in terms of opportunities it’s been great – a lot of people have reached out because they’ve seen the clip, and it’s nice that I’m at this point in my career where I have some videos online, it’s not like I’m one year in and I had a fluke of a video, I have the background, I can back it up,” she said.

“I’m now working on a tour for the south eastern US in the fall, and it’s completely all over the place, I went to Luxemburg in early March, things that weren’t necessarily on my radar, but people found me because of that clip.”