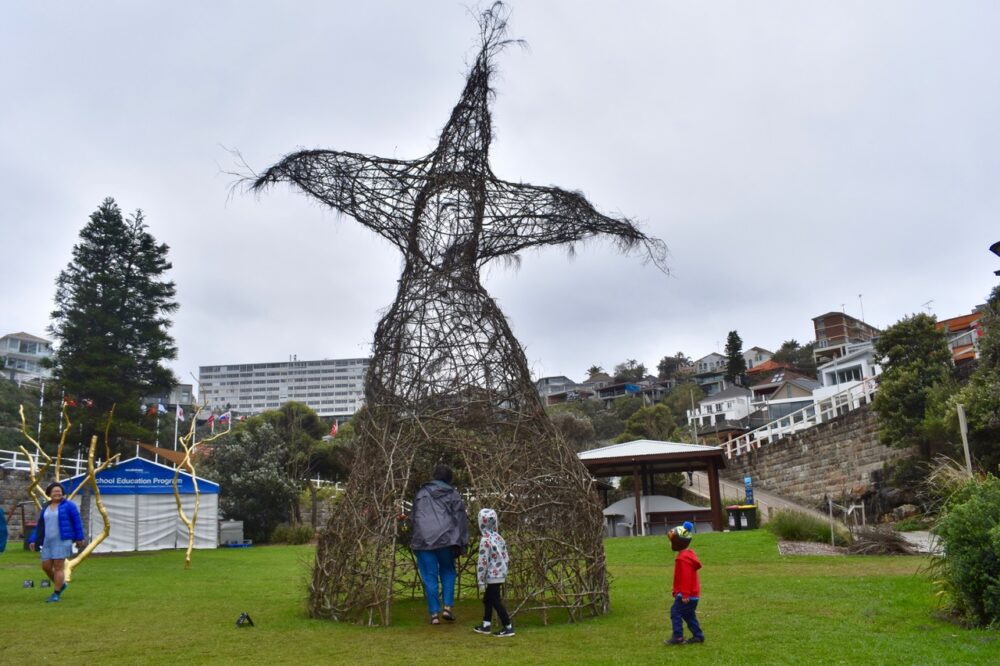 As thousands wandered along Sydney’s iconic Bondi to Bronte coastal walk this past October, there was something emerging from Tamarama Beach Park. After walking for two kilometres past one hundred works, a seven-metre tall sculpture emerged from the sandy grass patch.   Here was “Buddy” greeting viewers like a jester with branches waving to them in the breeze.

Environmental artist Marc Walter’s sculpture ‘Buddy’ stood proudly among works from local and international artists this year at the world’s largest free to the public sculpture exhibition in Sydney’s east. Walter is one of two Canadian artists selected for Bondi’s Sculpture by the Sea in 2018.

It took ten days for Walter to build “Buddy” from branches collected in advance by the Sculpture By the Sea organisers with most of them coming from Rossmore in Sydney’s south-west and some local cuttings from the gardeners in Tamarama Gully. Once completed, the sculpture stood for three weeks in Tamarama Beach Park where people could go inside, feel the space and be inspired to reflect.

Walter said that this sculpture was intended to heighten all of the senses of those interacting with it, rather than just pleasing to the eye.

“The light diminishes, it’s a little bit cooler, and the sounds are a little bit muffled. The eye first looks at the branches but then it bounces between the branches and the background and it means that they have a renewed look at everything.”

‘Buddy’s height also encourages people to look up and interact with the world around them.

“Because it [Buddy] is so tall, they have the feeling to look up and that is what my main interest in life is: is to get people to look up, because so many people look down and they concentrate on their problems which means that they don’t interact, they don’t talk … this piece hopefully gets people to slow down, and if you get them long enough in there, they can start to think about where they are in life and what they want to do with it”

One of the most unique aspects of ‘Buddy’ is that it is a “site-specific sculpture” meaning that Walter uses the surrounding natural environment as inspiration for his work. But how does a Canadian from the Outaouais, a region of western Quebec, create a sculpture like this in Sydney, Australia, without ever having been here before?

While the donated branches certainly make ‘Buddy’ a local sculpture, Walter tapped into online resources and used photos and maps as well as the knowledge of the local community to better visualise and understand the feel of it before he ever set foot in Tamarama Park.

Another important aspect of Walter’s work is that it is designed to decay into its environment. While Buddy remained at Tamarama Beach for only three weeks, ‘Buddy’s twin project in British Colombia will continue its full cycle from birth to decay in situ until April 2019.

While competition isn’t Walter’s usual scene, he is pleased that he took the leap and entered Sculpture by the Sea 2018 which he had watched from afar for almost a decade.

“It’s been a great experience and I wasn’t sure what I was going to find to be honest, I wasn’t sure if I would fit. But it was fantastic to come here and meet so many new people and I have been inspired by so many discussions that I had here.”

The participation of Marc Walter at Sculpture by the Sea was supported by Global Affairs Canada through the Mission Culture Fund and Bondi’s COOEE Art Gallery.