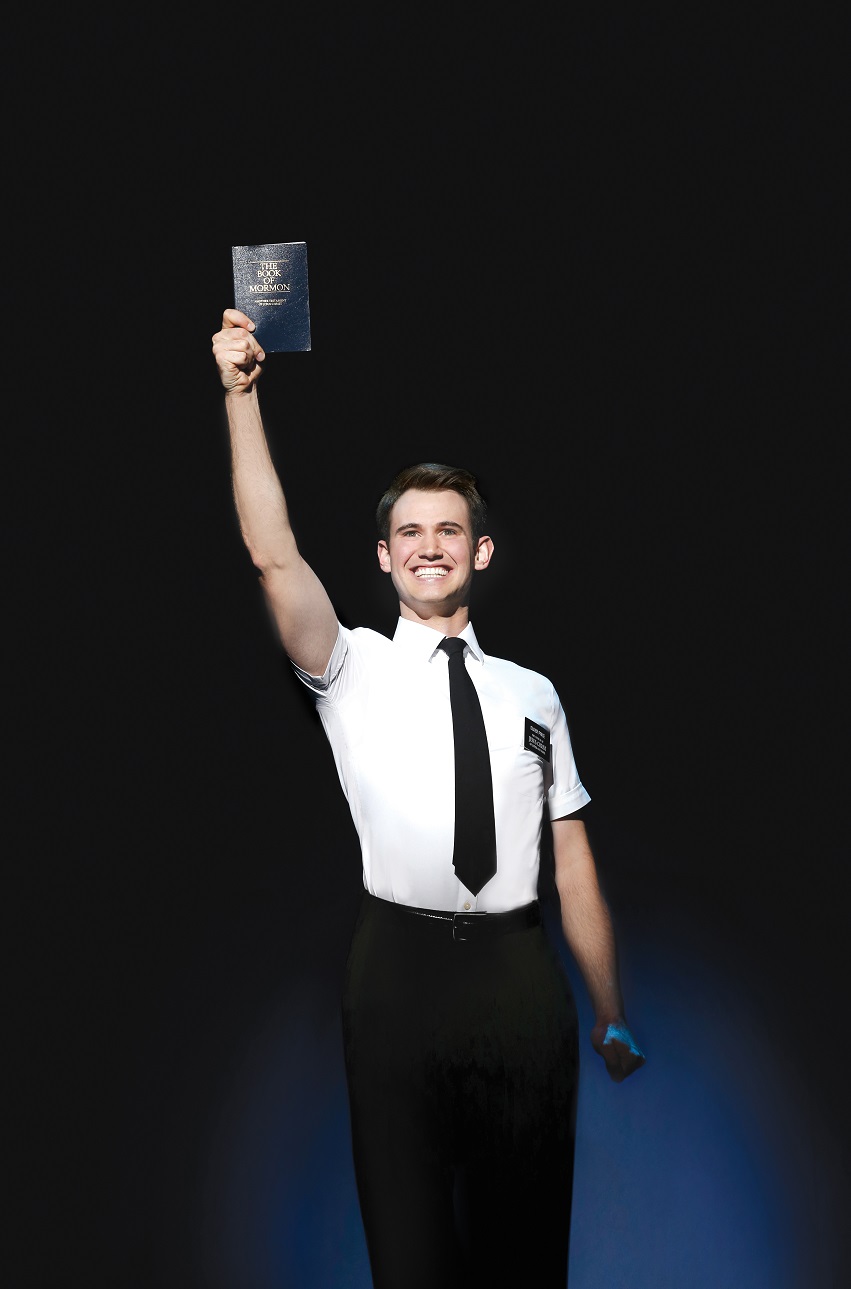 After wowing audiences overseas for six years, The Book of Mormon finally hit Australian shores in 2017 to packed out crowds and rave reviews, being led by its star Canadian, Kitchener’s own Ryan Bondy.

Starring as Elder Price in the smash hit musical, which follows two Mormon missionaries who travel to Africa to preach their religion,  Bondy has journeyed to Australia via the Canadian theatre scene, before stints in the touring and Broadway Book of Mormon casts. He says finding a path through a talented but stacked Canadian theatre industry was tough.

“I went to theatre school at George Brown Theatre School in Toronto after high school, did three years there and just kind of slugged it out and bartended and did all that fun stuff that every actor does when they’re trying to make it,” Bondy told Canada Down Under.

“I would do a three month contract for a show and then serve tables for a little bit, book a commercial and then that would pay the rent for a little bit. I was returning to different theatre companies in Canada which was great – the Canadian theatre scene, when you get into it is great, it’s just you’re a needle in a stack of needles, everybody is looking for work.”

His break came via an open call audition for The Book of Mormon, and after an exhaustive process, opportunity arose, but it was also the beginning of an extreme learning period.

“Through a process over months and months, open calls and going to New York for a couple of days, then I did  two weeks at what they called an ‘Elder Price Camp’, running numbers from the show every single day, then I was doing another summer contract at the Blyth Festival in Ontario, and I got the call saying I was going to join the tour in Chicago  in September of 2013 [as Elder Price standby], and for the next two and a half years I was travelling the US and Canada,” he said.

“I put my head down, I kept trying to do the best I could – I was just trying to really learn, because it was such an atmosphere and environment that I’d not been part of, being part of a mega-musical, and everybody at this level is so talented, and so you get to this other notch where you can learn from literally everybody that you work with.”

After getting the opportunity to prove himself during a two-month stint taking over as the lead Elder Price, performing eight shows a week in cities across the US and Canada, an opportunity to put down roots presented itself – but with a catch.

It was on the other side of the globe in Melbourne.

“Then the call and the opportunity to do Australia came about, and it was a sit down [a longer stint in a single city] – I’m 31, I want to have a sit down and have a routine – because it’s tough when every day you have off is a travel day and you set up in a hotel room, or you never really empty your suitcases,” he said.

“The tour was nice enough, before coming here they gave me six weeks off where I could go home and visit with my family, my nephew and all that kind of stuff, and that was really important for me to get a chance to do that before literally flying across the world to come here.”

A selling point of the Australian tour was the fact his cast-mate in the US, A.J. Holmes, would be joining him as a familiar face in an unfamiliar city, playing the role of Elder Cunningham.

“He and I were standbys together in Chicago my very first day. He had been with the company three months before I joined,” Bondy explained.

“We dreamt about doing the show together, but never really had a chance, and then this came up and we jumped at it – it’s been absolutely amazing.

“A.J. and I love making music together, so we’ve been working on an EP that’s coming out at the end of July, so we’ve been getting that finished up – it’s be a very cool full circle kind of experience where I get to be the lead guy every night with my best friend and with this amazing Australian cast.”

“This my first trip overseas, I’ve never been overseas anywhere,” he said.

“To feel the familiar aspects of the way Melbourne is to a Canadian city, a Commonwealth kind of attitude and that atmosphere was really comforting, it was really easy to settle in.”

It wasn’t all smooth sailing, however.

“Experiencing jetlag for the first time was real. I thought I had it taken care of the second night, and I was trying to stay up past nine o’clock, and my body was shutting down.”

And as a sports nut, being distanced from his beloved Toronto Blue Jays has been tough, but he’s managed to find a local sporting passion to get him through the pain – the Melbourne Football Club.

“I’m obsessed with the Dees,” he declared.

“Once I understood the sport, once I knew what was going on, I loved it. I think I like it better than NFL, AFL football is amazing – I collect cards now, I have all the players – I’m not even lying – I’m obsessed, I have a guernsey, a scarf and a hat.”

The time difference though, combined with his show schedule, has reaped some benefits.

“What’s great about being in Australia – I am sad to not see [the Blue Jays] live – but I get to wake up in the morning and start the day with baseball, it’s incredible,” he said.

“So I watch a baseball game and then go do the show, and I can’t go to many footy games, but I’ll watch – I’ve got the AFL app – and by the time I get home at night, PGA golf starts!”

With the reception to the show being as positive as it has been, producers have yet to announce a closing date for Melbourne, or whether the show will tour around other Australian cities.

“It’s basically as tickets sell – as of right now we’d obviously love it to be a year, but we don’t know,” Bondy explained.

“You hear of people flying in from Brisbane, flying in from Adelaide to see the show. Australia’s loving it, and I think as long as the love is there for it, I think we’ll be around.”

“I definitely have a huge Canada flag in my room. Having Trudeau be our representative, people are eager to talk about Canadians –travelling throughout the US and here, people love Canadians and it feels good, you feel welcome and you don’t need to justify yourself,” he said.

“I like representing Canada, I hardly ever leave the house without a Jays hat, if they’re playing I’ve got my jersey on – similarly I wear my Dees guernsey every time they play – I love that kind of stuff, being proud to be Canadian.”

The Book of Mormon is playing at the Princess Theatre in Melbourne.