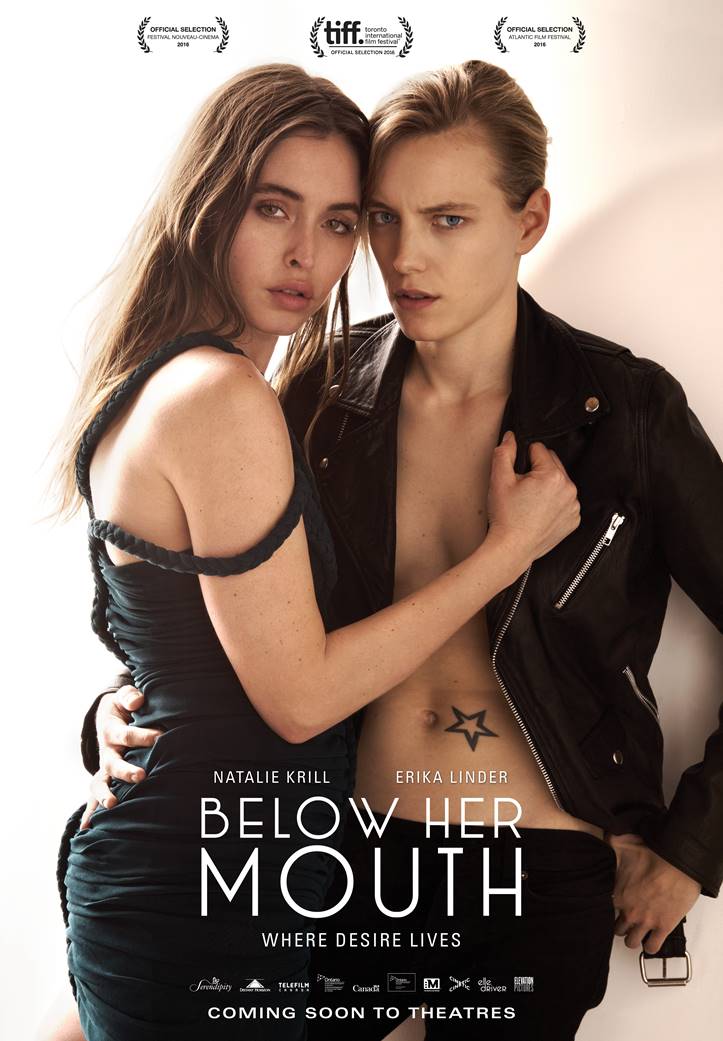 On the surface, April Mullen’s film Below Her Mouth could seem like a standard story of passion, albeit a queer one. Some further delving, however, shows a film created to fill a void, and providing to a wanting audience a story told through a different lens.

The film centres on characters Jasmine (Natalie Krill) and Dallas (Erika Linder) who meet and begin a passionate love affair. Set and filmed in Toronto, the production had an entirely female crew, which director April Mullen says provided a comfortable and safe setting for all involved.

“We decided to have an all-female crew top to bottom, so from our production design onwards, every single thing had a female perspective or female touch which was as authentic and as raw as we could be,” Mullen explained.

“We were all able to take down our barriers and say ‘ok, this is who we are’, which was nice because it felt like a very common goal, that we were working on something as a collective, and there was so much support and encouragement, both the actors felt so comfortable when it came to exposing themselves.”

The film, which played at the Mardi Gras Film Festival in Sydney to rave reviews, is an intense look at a powerful connection between two people, and investigating what can happen  in these moments is what drew Mullen to the project.

“I’ve always been really intrigued by what makes two human beings want to connect, and that chemical reaction between two people and how for some reason some people you meet an electricity kind of soars through the air and you want to go through their body – I’m fascinated by that,” she said.

“[Below Her Mouth] is about the chemistry between the two girls and just having that come off the page and have that feeling of freedom and jumping off of a diving board into love, that’s what intrigued me about the material.”

The intense subject matter meant casting the right actors to create the perfect chemistry was vital for the success of the film. Mullen says the filmmakers felt the pressure.

“When we started casting, we decided as a team that if we weren’t able to find the right two actors we weren’t going to make the film, so everything relied on basically the charisma and the charm and the bravado that [the character] Dallas had to carry,” she said.

“We really wanted it to feel authentic and ideally cast queer-for-queer, and then I discovered Erika Linder’s face in black and white on the internet and I was like ‘this is Dallas’, I have no idea if she speaks English, she’s this Swedish supermodel, I have to hunt her down.

“When we found Natalie Krill, she had this very whimsical sense of wonder, and she was very raw emotionally, vulnerable and open, and the combination of the force and the openness kind of created this instant chemistry – when we saw them read together for the first time, it was very obvious.”

Setting the film in Toronto was not an accident, either. Mullen says the city is a living representation of the inclusivity, equality and love the film is about.

“I think more than ever the fact that in Canada we’re able to just express ourselves without reservations or restrictions and feel a sense of freedom as artists to put whatever we want to express on the screen is really important, and it’s important for a bigger picture as a message to the rest of the world as to what is accepted and what is completely welcomed in Canada.”

Being a queer film, an instant assumption would be that it would appeal to a niche audience; however Mullen says she has been surprised by the thirst for a different kind of love story told through a different lens.

“What I found with the film is that there’s a serious craving for positive, fluid, very free, celebrating sexuality and openness in general, so it’s almost coming from the younger generation who are not finding themselves on the screen,” she said.

“They are searching for films that break barriers, that are not afraid or ashamed to celebrate sexuality – that beautiful young new generation are the people who are driving the market and who are craving an alternative and a fresh take on love, and I feel that the film really appeals to them, and I didn’t know that going in.”

The Consulate General of Canada, Sydney is a proud supporter of the Mardi Gras Film Festival, and it is through that support that April was able to join us in Sydney. April also joined us to proudly march for Canada at the Sydney Gay and Lesbian Mardi Gras parade.