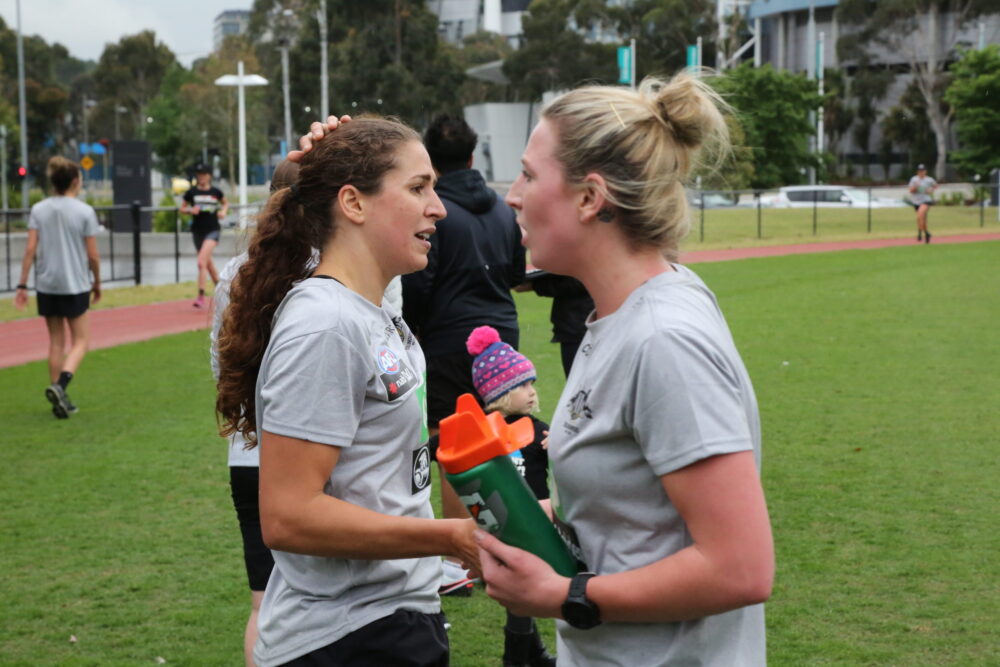 For Canadian footballer Kendra Heil, the excitement of being rookie-listed to an AFL club for the debut season of the AFL Women’s competition couldn’t have come at a better time. After missing the 2016 season with her VFL club team, the Eastern Devils, with a knee injury, and initially missing out on the AFLW draft, everything was starting to look up.

“It was a little bit of a roller coaster – I injured my knee last January and had surgery, so I was on the up, everything was starting to feel better, then I didn’t get drafted in the initial draft, so that was a down and then I got picked for the rookie list for Collingwood,” she explained.

For the second year running, Heil, who hails from Toronto, has been forced to make the transition from player to off-field support staff – though finding her place within a new, professional organisation has been difficult.

“I think I could have felt worse if I didn’t have such a supportive environment around me – women’s football is really supportive, not within just our own club or my home club, the Devils, but all the clubs -everybody just gets around each other, so the community around football is really lovely,” she said.

“I was already doing [off-field support] last year for my VFL club, for the Devils – I stand on the sidelines and try to get around everyone – if someone needs a gym partner I go with them – and just try to be a positive influence around everybody as much as I can, because if it lifts them up, it lifts me up.

“With Collingwood it’s a little bit different than with the club team – with the club team you always need lots of volunteers so there’s always something to do, and here there are so many people around that are just so giving with their time and just want to be part of it, so it’s hard to find a spot to fit in, so I might just be number one fan on game day.”

Heil’s journey into AFL has been unique – she would likely be the first professional AFL player who actually took up the game overseas, playing in Canada for the Hamilton Wildcats.

“I started playing footy in Canada, and I got into that because my personal trainer at the time asked if I wanted to try a new sport – he said he’d give me free sessions if I did – and as soon as I went to the first training I absolutely loved it,” she laughed.

“After seeing me play, the coaches of the Canadian team selected me for the Parallel Cup where you play against a team from the States, so I played in that two years in a row, and then I got picked for the International Cup team in Melbourne, and I thought what better time to come a little bit early on a working holiday visa – I played footy for the [VFL side] Eastern Devils and I decided to stay, so my partner and I applied for a visa.”

With the first season of the AFLW about to get underway, excitement levels are building with players and supporters alike – Heil says it’s infectious.

“Everybody’s just so excited about it and the people that aren’t excited, they get just a little taste of it and then they see why everybody has been drawn into it,” she said.

“I’m just hoping that everything runs smoothly with the league and that we showcase exciting football, because that’s the most important thing – we want to make a really good product that we want to play in and people want to watch.”

With on-field involvement with Collingwood clearly having to be kept to a minimum, Heil has turned to what has been a neglected love – art, and is looking to combine her two passions.

“I have an Arts degree from the University of Guelph and I kind of put my art on the backburner when I moved here – before I moved I was doing large-scale murals and really decorative painting. As soon as I got here I didn’t have all my supplies, I drifted back into residential painting and now I’m just starting my painting again because I can’t work, I can’t go on ladders,” she said.

“So I’m doing a series of paintings for Collingwood – I’m going to be doing paintings for all four sections of the club: the AFL, the VFL, the netball women, and the women’s AFL, just to showcase Collingwood, because I’m really thankful for all the support they’ve given me, and I’d like a portion of the proceeds to go a charity of my choice – I’m looking at different cancer and leukemia charities in support of my Dad who passed away.”

The inaugural  AFLW season runs from Friday January 3, with games being played right around Australia. You can find Kendra – who is producing some entertaining AFLW videos – on Twitter. You can see some of her artwork in this AFL Players article.